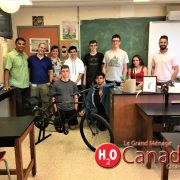 Dirty laundry and access to electricity are just some of the issues or problems that impact many people living in homelessness across the island of Montreal. The Macrobotz team from Macdonald High School accepted the challenge to solve these problems by designing and building an active, creative, and sustainable solution…Introducing “Green Cycle 1.0”!

The purpose of this project was to support the local homeless population with access to clean laundry. Students aimed to help solve problems related to energy scarcity across Montreal and the entire process from deciding on a product/service/or event was a student-led initiative. They were able to take advantage of available resources at their school to design and build a finished, functional prototype for their bike-powered washing machine.

The design of the prototype was conceived by the students from the Lego Robotics team, known as Macrobotz (a first year team at the school). Most of the parts, including the bicycles, wheels, barrels, and bearings were obtained through donations from the school and external communities. The welding, modifications, assembly of the prototype, and painting were carried out in the robotics/machine lab at the school.

The whole project was a resounding achievement where students identified a real-world problem and decided to take action. Their project had an immense effect on those in need and should be an invaluable resource for years to come. 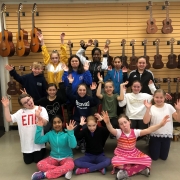 The Jr PC Players is an exciting collaboration between the students of Pierrefonds Comprehensive High School and local elementary schools in the area. The program consists of high school students giving drama workshops to younger groups in preparation for their end of year show!

The classes offered required the students to help with preparing the workshops, teaching dance, choreographing to the music, costuming, singing and supervising the rehearsals. Throughout the year, PCHS students had a chance to gain invaluable experience organizing, managing and collaborating as part of a group for a great cause. The final performance was an end of year showcase for the elementary school students to feature all that they’ve learned from their amazing mentors!

Everyone loved the final show and the whole program was an amazing chance to work together as well as support a love of the arts. How about a round of applause for the Jr PC Players! 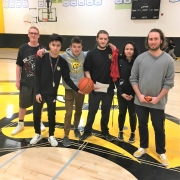 The students of Dalbe-Viau High School helped create and establish a friendly basketball tournament for all students during their lunch break. The tournament was a great chance for students who are not currently apart of any school sports teams to participate in a healthy activity which promotes exercise and having fun!

The tournament itself was arranged to help encourage a healthy lifestyle and required students to assist with the planning, rules and organization of the event. The project was designed to host up to 50 different students across several teams all competing for 1st place in the tournament. Being able to invite and include many classmates, who otherwise wouldn’t have a chance to participate, showed great leadership and was the perfect way to help spark new friendships!

While there can be only one champion, I think everyone would agree that all participants were winners. The Basketball Tournament project was great for team-building and will hopefully be back next year! 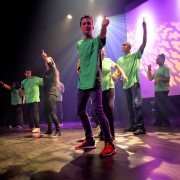 The “JFK Productions” project involved more than 20 students from John F. Kennedy High School and had them participate in the production of their very own, original film. The whole process was a huge challenge which truly motivated students to take the initiative and work together towards a common goal.

The entire project required the production team to be involved at all stages such as; script-writing, acting, directing, editing and everything else. After wrapping the final film, the students even organized a ‘Screening Night’ where parents, teachers and classmates were invited to watch the premier. All proceeds generated were used to fund an evening gala which rewarded and highlighted their amazing achievements!

Students loved being able to take charge of their own project and the whole process was truly inspiring for students with more limited interests. Collaborating as a group was an amazing opportunity to connect with fellow students and create lasting, genuine friendships! 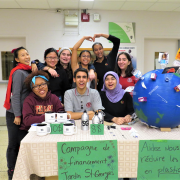 More than 25 students took part in the ‘green week’ project and quickly began researching about creating their own garden to attract monarch butterflies, bees as well as other important organisms for the eco-system. Students also helped establish a large ‘clean-up’ on school grounds.

At the end of the year, volunteers were able to be part of the youth delegation taking part in the climate change summit in Quebec City. Without a doubt, students learned more about the different environmental issues of today and further developed their eco-conscience. 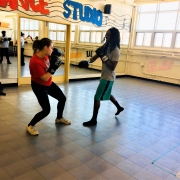 The Lakeside Academy Boxing Club was an initiative brought forth by students looking to create a program for others looking for a hobby they can be passionate about outside of school. Many young adults often have trouble expressing themselves or reducing anxiety in a safe or constructive manner and sports can be hugely beneficial in dealing with the issues everyone faces.

By creating their very own ‘How-To’ videos, students of the Boxing Club wanted to share their knowledge with other kids looking to join in the fun. After a simple request for new equipment, the school donated and provided the club with all new gloves and training gear for the program. Two students began recruiting others looking to get involved and help out with the whole course planning. The next step was to hire a professional boxing coach to train the students on how to use the equipment properly and in a safe manner. Students then decided to film the training sessions as a video guide for those interested in becoming a part of the club. With the videos fully-produced, a lunch-time program was offered by students for those interested.

The project was a great way for students to promote proper exercise habits, mental health, as well as a way to learn more about running their own business. Hopefully the course will continue on and bring in new members for the Lakeside Academy Boxing Club!